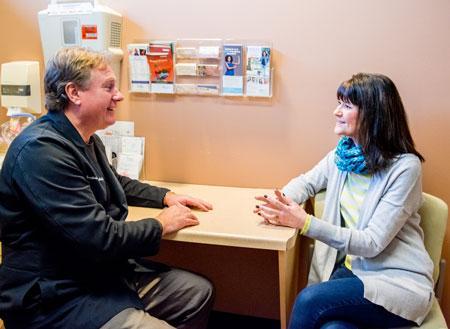 You will have the physician of your choice as your primary physician for your periodic ob/gyn checkups and scheduled visits. If there is ever a time when your personal physician is not available and you need to speak with us, one of the other ob/gyn physicians in the group will be available to address your concerns.

Abnormal uterine bleeding is defined as bleeding that lasts longer or is heavier than normal, bleeding occurs between periods or a menstrual cycle is not regular.

It is normal for periods to be irregular at certain times of life, specifically for the first few years after a girl begins to have periods (around age 9-16) and also as women approach menopause (around age 50). Menstrual cycles that are longer than every 35 days (bleeding too seldom) or shorter than every 21 days (bleeding too often) are not normal. Women with such cycles should be checked by a doctor.

Abnormal or heaving uterine bleeding may occur because of hormonal problems which is when the body makes too much or not enough of a certain hormone. This imbalance in hormones can be caused by weight loss or gain, heavy exercise, stress, illness or use of some medications. The most common result of a hormone imbalance is anovulation – when the ovaries do not release an egg and a woman does not have a period.

Other causes of abnormal uterine bleeding include pregnancy, problems linked to some birth control methods, infection of the uterus or cervix, uterine fibroids, problems with blood clotting, certain types of cancer or a chronic medical condition.

Endometriosis can cause pain before and during menstrual periods. For some women the pain is mild. For others it can be severe. Severe endometriosis may lead to infertility.

Treatment depends on the extent of the disease, symptoms and whether you want to have children. It may be treated medically, surgically or both. Although treatments may relieve pain and infertility for a time, symptoms may come back after treatment.

This gentle procedure has been highly effective in helping women of all ages.

You can learn more about the FemiLift procedure by visiting the Alma Lasers website or by Clicking Here. The site includes more videos about the procedure.

Human Papillomavirus (HPV) is a common cause of sexually transmitted diseases (STDs). Over 80 types of HPV have been identified, approximately one-third of which are spread by sexual contact.

Treatment of genital warts varies depending on their size and location. Imiquimod cream can be applied by the patient at home, eliminating potentially frequent office visits although treatment can take longer. Your physician can offer in-office treatments including:

Low risk types (which include HPV-6 and HPV-11) rarely develop into cancer but may cause cellular changes known as dysplasia that require surveillance and possibly treatment.

A number of other, less obvious typos including HPV-16, HPV-18, HPV-31 and HPV-45 are considered high-risk HPV types. They cause the growth of flat, nearly invisible cells that are commonly revealed through a Pap test. The most effective test, and used exclusively for all our clinic patients, is the ThinPrep Pap Test. This test has been proven tot increase detection of precancerous cells significantly over the traditional Pap smear test. In addition to the ThinPrep Pap Test, a test known as “the HPV test” has become available which, when used following an abnormal Pap test, detects virtually 100% of all high-grade cervical disease and cervical cancer.

The discovery of abnormal cells during either one of these tests may indicate precancerous conditions. Commonly seen in young women, these conditions often return to normal within a few short years. Other types of cellular changes will likely require further evaluation including a colposcopy.

A number of methods may be used for treatment of an abnormal Pap test. A series of repeat Pap tests or colposcopies may be required to monitor the abnormal cells. Cryocautery (freezing) and LEEP (loop electrosurgical excision procedure), which uses a hot wire loop to remove affected tissue, are office-based procedures that destroy the abnormal cells. Laser treatment and conventional surgery are other options.

Infertility is defined as not being able to get pregnant after one year of trying to conceive. This definition changes to six months if a woman is 35 or older. Women who can get pregnant but are unable to stay pregnant may also be classified as infertile.

As women are waiting longer to have children, infertility is becoming more common. Roughly 20 percent of women in the United States now have their first child after age 35. Approximately one-third of couples in which the woman is over 35 have fertility problems.

According to the Centers for Disease Control and Prevention (CDC), approximately 10 percent of women (6.1 million) in the United States ages 15-44 have difficulty getting pregnant or staying pregnant.

Most cases of female infertility are caused by problems with ovulation. Without ovulation, there are no eggs to be fertilized. Some signs that a woman is not ovulating normally include irregular or absent menstrual periods. These ovulation problems are often caused by one of two conditions:

Less common causes of fertility problems in women include:

Many things can change a woman’s ability to have a baby. In addition to age, other factors include smoking, excess alcohol use, poor diet, stress, excessive athletic training, being overweight or underweight, sexually transmitted infections and other health problems that cause hormonal changes (including PCOS and POI as described above).

Our physicians consult patients regarding the variety of issues surrounding infertility. To provide the specific treatment required to address infertility, we refer our patients to the following specialists:

Novasure endometrial ablation is a one-time, five minute procedure that can safely and effectively reduce or eliminate heavy menstrual bleeding. It is quick, safe and minimally invasive. The endometrial ablation procedure is designed to remove just the uterine lining-the endometrium- which is the part of your body that cause heavy periods. No incisions are required, leaving your uterus intact. For women who are finished with childbearing and want relief from heavy bleeding, the Novasure procedure is a great option that doesn’t require hormones and is less invasive than a hysterectomy. It’s a simple procedure that is completed by our providers as an Outpatient procedure at UnityPoint-Meriter.

Talk to us today about stepping back into life with NovaSure or visit www.novasure.com.

Pelvic Floor Conditions such as; Overactive Bladder, Stress Urinary Incontinence, Dyssnergic Defecation, Uterine or Vaginal Prolapse or Weakened Pelvic Floor are all common conditions for women. Problems with injury or damage to the pelvic floor musculature, bowel, bladder or uterus can be addressed by meeting with one of our Board-certified Gynecologists. We obtain your history and perform a careful exam.

Treatment options vary from medications, to surgery, office CO2 laser treatment, or physical therapy according to what and where the problem exists.

Polycystic ovary syndrome is a disorder that results from abnormal levels of certain hormones. Women with PCOS may have irregular or no menstrual periods. PCOS is a genetic disorder where eggs are not released from the ovaries, causing low progesterone levels and high androgen and estrogen levels.

PCOS can cause health problems in women but can be treated. Treatment depends on your symptoms and whether you want to be come pregnant. Long-term treatment may be needed if other medical problems arise.

"This group of amazing doctors helped me through 2 awful pregnancies (5 months bed rest with my daughter and 3 with my son) I was a wreck after 6 miscarriages. They were wonderful!”

How Can We Help?

Office Hours
Get in touch